Meet-and-greet will help farmers, food co-op bolster each other

Farmers thinking about future growth will join up with owners of the planned Rogers Park Food Co-op at a Meet the Farmers event from 5 to 7 p.m. Wednesday, April 27 at Uncommon Ground restaurant, 1401 W. Devon in Chicago.

Nearly a dozen farm enterprises will talk about their operations as the food co-op works to reach an interim goal of 200 co-owners and later open a storefront in the diverse lakefront community. The event is free and open to all, owners and non-owners alike.

Nick Choate-Batchelder, who runs Midnight Sun Farm with his wife Becky Stark, already does business in Rogers Park by bringing his onions, kale and other produce to the Glenwood Sunday Market. The farmers also fill boxes for a 22-week Community Supported Agriculture program, but after expanding in 2014 to a 50-acre space in Harvard, IL, more and bigger markets are key.

“Farmers markets are great, but they are only 30 weeks a year,” said Choate-Batchelder. An ongoing relationship with the food co-op, he said, would create a long-term market for the farm's sustainably grown produce. 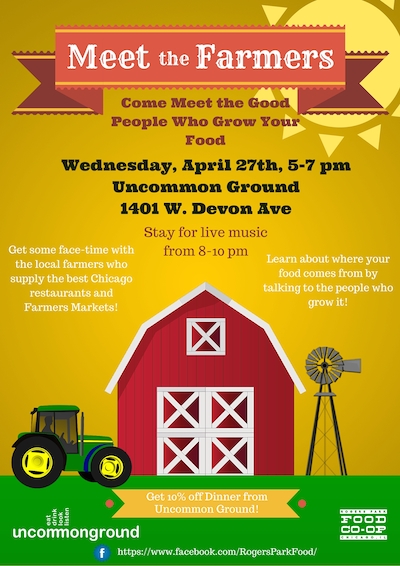 Other produce farmers coming to the event include Wild Beet Farm, which grows tomatoes, zucchini and of course beets on two acres in northwest suburban Indian Creek, IL; Big Head Farm, which produces apple cider, quail eggs, honey and organic vegetables in Benton Harbor, MI; The Urban Canopy, which operates an indoor microgreens facility at The Plant and an outdoor farm near 76th Street, both in Chicago; and Dirt Doll, a locally owned farm that sold produce the last two years at the Glenwood Sunday Market, but is on hiatus in 2016 for lack of suitable growing space.

Producers of sustainably grown meat and fish will include Jake's Country Meats, a sixth-generation farm in Cass County, MI, with a specialty in pork, poultry and beef; Mint Creek Farm, whose pasture-raised lambs, goats and other livestock graze on 220 certified-organic acres in Stelle, IL; Timberfeast Woodland Meats, which raises livestock on pasture and woodlands in Chatsworth, IL; and Sitka Salmon, which sources wild salmon from a network of fishermen-owners in Alaska.

"The response from farmers has been overwhelmingly positive, especially considering what a busy time of year it is for them," said Mary Meyer, the co-op's vice president and founder. "We think working with farmers is a winning combination, because it gives them an increased market opportunity while our community gets the best, freshest food available."

Following the meetup will be Farm Fresh Jams, four local bands – Signal-to-Noise, Luna Blu, Abbie & Marlon and Abud: A Bard – will play a no-cover show at Uncommon Ground from 8 to 10 p.m., with tips benefiting the co-op.

No tickets are needed to attend, but RSVPs are appreciated.

Patrick Barry is editor of Chicago Farm Report, a web publication tracking local food and farmers. He and his wife Pam recently became owners of the Rogers Park Food Co-op.